In late 2016, the Wellcome Trust, a major UK-based funder of biomedical research, became the first major funder to launch its own open access publishing venue. Wellcome Open Research was created specifically for Wellcome grantees to publish their research openly using the publishing model developed by F1000Research, an open science publisher who run the platform on behalf of the trust. Several other philanthropic and public research funders, including the Bill & Melinda Gates Foundation, have since followed suit in setting up their own open publishing platforms.

This webinar will give an overview of current and upcoming funder publishing platforms, as well as discussing why funders are putting their weight behind this approach, future developments and the issues they need to navigate.

Tom Ingraham is Scholarly Communications Officer at the University of Queensland. He was formerly an Associate Editor and Publisher at F1000Research, spending six years at the company from its inception in 2012 until early 2018 managing several of its publishing initiatives and community-based article collections.

The journey and philosophy behind CCANZ’s move to Tohatoha with Mandy Henk. 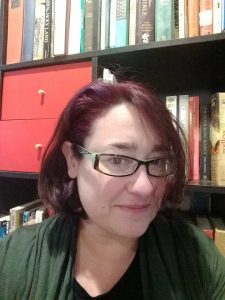 In scholarly publishing your name is everything, and for many organisations it’s a difficult prospect to change your entire public presence to adhere more closely to your vision for the future, but that’s exactly what Creative Commons Aotearoa New Zealand has done. In this webinar, Tohatoha chief executive Mandy Henk, strategic advisor Dione Joseph and communications manager Brendan Boughen explain how and why they needed to make the change and how it’s invigorated their mission.  They discuss their hope for a world where New Zealand leads by ensuring universal access to research, education and culture and where Aotearoa builds a fair and equitable information system.

The Open Library of Humanities, is a UK-based charitable organisation dedicated to publishing open access scholarship with no author-facing article processing charges (APCs). Its aim is to make scholarly publishing fairer, more accessible and preserved for the future. It is currently supported by 230 or so academic libraries from around the world, including Cambridge, Harvard, Princeton, and Carnegie Mellon.  Regional supporters include University of Sydney, University of the Sunshine Coast, and Auckland University of Technology.

Our presenter is an author, editor and the marketing officer at Open Library of Humanities Dr James Smith. A Perth native, Dr Smith received his doctorate in History from the University of WA.  Now an Ireland-based researcher and author at Trinity College Dublin, his first academic book is Water in Medieval Intellectual Culture: Case-Studies from Twelfth-Century Monasticism (Brepols, 2018). He has edited The Passenger: Medieval Texts and Transits  (Punctum Books, 2017), and co-edited a themed volume of the Open Library of the Humanities on New Approaches to Medieval Water Studies. 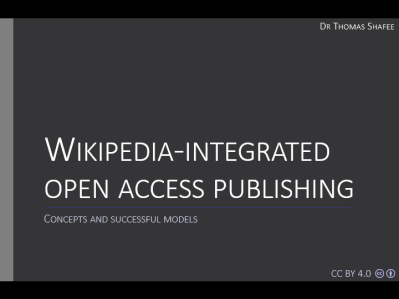 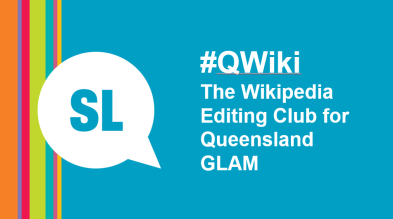 Wikipedia and its sister-projects comprise one of the world’s largest open-access initiatives. Greater involvement by experts, researchers and academics is being encouraged by a variety of Wikipedia-integrated academic publishing models.

1) a stable, citable, version of record, as well as,

2) a living version integrated into Wikipedia that can be constantly updated. Examples include PLOS, Gene & RNA Biol.

Hear how  journals can be built entirely on free to access MediaWiki architecture which is open, designed for collaborative writing, and which allows for OA publishing to be achieved with no article processing fees.

Bridging the Academic-Wikipedia divide improves the scientific accuracy of the encyclopedia, and rewards academics with free, impactful, citable, publications that achieve far greater public reach than they can normally access. 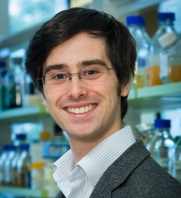 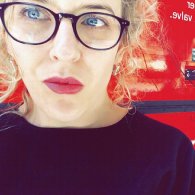 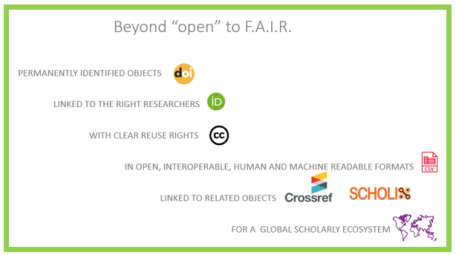 The word fair can mean many different things to many different people, but it’s generally a description of activities or processes which are just, equitable and reasonable.  Within scholarship it’s been used as an acronym FAIR (Freedom of Access to Information and Resources) for the ongoing campaign for an open democratic society where everyone can access information.  In 2015, fairness was found in another acronym in the F.A.I.R. Data principles (Findable, Accessible, Interoperable, and Reusable).  Created to support knowledge discovery and innovation and to promote sharing and reuse of data, these principles informed the development of the F.A.I.R. Access policy statement in 2016 for all Australian publicly funded research outputs.

Scott Abbott sent this link for the Economic, social and ethical argument for OA

Anne Stevenson sent this link suggesting there may be more analysis in Heather Piwowar’s latest article.